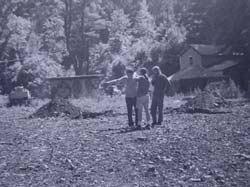 One early evening, in the Fall of 1969, a young Rutgers University student used the basement workshop in a friend’s house in Bernardsville, New Jersey to make a tobacco pipe from a piece of cherry wood. In January of 1970, along with two partners, he started a business to make tobacco pipes from domestic hardwoods and sell them to stores. The Mill had begun.

Shortly after its formation, the business’s owners made a deal with a distributing company in New York City, which gave the Mill enough money to purchase its first table saw. It gave the distributor free Mill pipes until the saw was paid for. The Mill also acquired its very first distributor, who purchased Mill pipes at a discounted price and resold them to stores.

From a desire to migrate from the suburbs of New Jersey, where all the owners of the Mill grew up, two of the original owners, as well as a new third partner, decided to purchase land in the country and build their own shop. Since the brother of a friend lived in Corning and worked for Corning Glass Works, the Mill people had a place to stay while exploring real estate in the Corning area.

A purchase was made in the spring of 1971 of over 15 acres of land along Ryers Creek in Lindley, New York, a town 10 miles south of Corning. The parcel cost $9,000.00. The Mill obtained this money by borrowing from the mother of one of its partners. At the time of the purchase there was a small house and a small shed on the flat section of the property, along the creek.

In order to begin production immediately, the three Mill partners, along with their spouses, friends and neighbors, set up an army tent and ran a long extension cord to the house. This tent served as the shop in which Mill pipes were manufactured. The final finishing steps were done in the dust-free shed that came with the property. Orders were also packed in this shed and then picked up by a UPS truck.

The construction of the first permanent Mill shop proceeded through the summer and fall of 1971. This building is an eight-sided pole barn. It was constructed largely by young suburban-raised adults with no building experience, with the help of some skilled neighbors and friends.. In the Fall of 1971 the shop was complete enough for a fourth, new partner to move into the upstairs loft-apartment with his wife.

During the next year The Mill’s owners began to attend trade shows in New York City, to determine if there were any suitable venues for their pipes. Mill pipes were also sold at craft shows as close as Ithaca, Rochester and Buffalo and as far away as Massachusetts and Maryland.

June 22, 1972 brought a natural disaster to Corning which affected much of the city a lot more than it did The Mill. A week of unusually heavy rain brought the Chemung River over its banks and caused the dike protecting Corning to give way. The heavy rains also caused creeks to swell.

The raging waters of Ryers Creek, which flows through the Mill’s property, washed out the sluice pipe that provided safe passage from the parking lot of The Mill to Ryers Creek Road. Mill people scrambled across ladders to ford the creek and took refuge with some neighbors on higher ground. The shop and small shipping shed remained unharmed.

The next few years came with several ownership changes for The Mill as well as the hiring of a future owner. In January, 1973 The Mill exhibited at its first trade show, in New York City. This show, and others like it, became the primary source of Mill customers. A mailing list was created from contacts made at these trade shows. The Mill began to do regular mailings of its catalog.

Also in 1973, while exhibiting at a trade show in New York City, the Mill owners made contact with a small pipe business which made tobacco pipes from exotic hardwoods. The Mill bought many sticks of these woods and several pipe-making machines from this business.

By the summer of 1973, The Mill was using exotic hardwoods for its pipes instead of domestic walnut and cherry. Many different rosewoods, imported from Mexico and South America, were tried until the decision was made to make Mill pipes from only ultra-exotics, those with the most beautiful color and figure.

During the summer and fall of 1973 a new building was put up. It replaced the tiny shed that had been used for finishing, packing orders and shipping. It was built a short distance from the eight-sided shop, parallel to Ryers Creek.

Father’s Day of 1976 brought another water disaster to Lindley. In fact, this flood, which affected creeks more than rivers, did much more damage to The Mill than the flood of ’72. Early in the morning of June 22, 1976, Ryers Creek swelled its banks and pushed a three-foot high retaining wall through the back side of the eight-sided shop. After weeks of cleaning, rebuilding and repairing damaged machinery, with the most generous help from neighbors and friends, The Mill resumed business as usual.

By 1980, after being in business for ten years, The Mill had outgrown its shop space. At that time an office was built onto the shipping building which was converted into more shop area. The office was made big enough to hold finished inventory and to allow orders to be prepared for shipping. It was remodeled during the summer of 1999, when it became a more efficient shipping/receiving area.

1980 brought to The Mill a machine which revolutionized the way it made pipes. One of the owners was trained in how to run this rebuilt, nineteenth century piece of equipment. This training included how to grind the knives used in the machine. He ran it for many years. This machine increased the efficiency of production at The Mill so much that, for the first time in its history, it was able to offer discounts to distributors. Selling to distributors, who then sold to stores, brought a significant increase to The Mill’s sales volume.

Besides experimenting with different woods, The Mill has also experimented with different management systems. The two current owners have been working there for a combined total of sixty years. Although they have been very hands-on they never wanted to be foremen. While one owner has handled record keeping and sales, the other has been overall production manager. Daily operations at The Mill are maintained by four foremen, all of whom have worked there for more than twenty years. At one time in its history, each of these foreman designed and produced pipes in his own shop, on a piece work system. They are now in charge of 20 shop workers.

In 1995 The Mill added a new wood to its inventory. Known as Rainbow Wood, its brightly-colored laminated composition makes it possible to craft multicolored designs from one piece of wood. In 2001, another laminated wood, known as Extreme Wood was added to the line. Tradeshows and catalog mailings remain the main sources of advertising for the business. What also remains is the The Mill’s commitment to quality and service which have helped make it a supplier of fine, exotic wood tobacco pipes for more than 33 years.